Evolution of Carpets Narrates a Timeless Tale of Handmade Artistry !

Carpets! The sudden whisper of this word brings to fore a beautiful piece of art which is a luxury to walk on! The timeless artistry on mesmerizing carpets bespeaks the tale of an ancient art of hand knotting which evolved over centu-ries and spread its glory all across the world.

In different countries, the name ‘carpets’ and ‘rugs’ are used interchangeably. The history of carpets or carpet flooring, in fact, goes back to thousands of years when human beings started using animal furs to prevent themselves from cold. However, with domestication of animals, the reliance on using furs for floor coverings decreased and the use of woven material increased significantly. Over the years, a diverse variety of natural and fabricated materials were used to provide comfort to humans.

The earliest knotted rug, the Pazyryk carpet, in fact, was woven around 464 B.C. This carpet, discovered in 1960 in Outer Mongolia, measured around 5 by 6 feet. Encompassing characteristics of a modern Persian or Anatolian rug with a pile and Ghiordes knot, this carpet design accommodated a dominant tile-work central motif, surrounded by pristine borders, featuring well-defined rows of elk and horsemen.

Meanwhile, handmade carpets, over the centuries, underwent gradual evolution with changes in its weaving design to generate more elaborate carpet de-signs. The Middle East from Persia to Turkey became the main region for hand-knotted carpet production around the middle ages onward. At the start of the 8th century BC, carpets emerged as the status symbol for wealthy families. The affluent society felt pride in adorning their homes with elaborately woven wool rugs and designer carpets. The trend of home carpets started catching up fast at this time.

The rug making process gradually started spreading south into Persia. Tabriz, Kashan, Herat, and Kerman soon became centres of rug production. In the late 16th century, the famous Ardebil carpet with over 32 million tightly woven knots was made under the Persian king Shah Tahmasp. Measuring around 17 by 34 feet, this priceless work of art is preserved in the Victoria and Albert museum in London and is considered as one of the most magnificent handmade rugs in the world.

The carpet making process sneaked into India in 16th century during Mughal era, through Caucasus and Morocco. The Mughals borrowed the Persian tech-nique of carpet weaving and introduced the Mughal carpets in India which were as obscure as their miniatures and depicted court life, animals and floral decorations. These carpets were brightly coloured and their hand knotted silk carpets had high number of knots per square inch. Mughal emperor Akbar es-tablished carpet weaving centres in Agra, Delhi and Lahore to produce Mughal carpets. This art grew and flourished in India and was modified as per the roy-al tastes while being mixed with the Indian arts. The Persian carpets were thus re-created in Indian forms which soon went famous in the subcontinent. 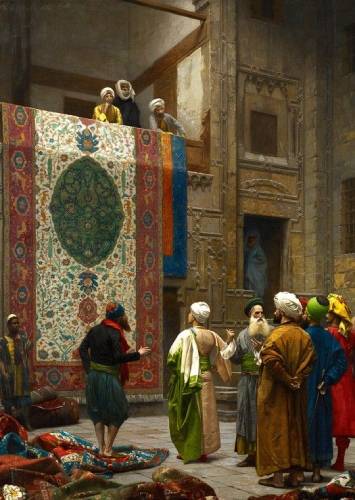 The present carpet weaving tradition in India remains largely influenced by the carpet tradition of the Mughals, however, the modern Indian carpet and floor-ing traditions are yet again a continuation of the same tradition. Kashmir is home to the finest silk carpets in India.

Going further, by 19th century, the emergence of synthetic fibers, such as ny-lon in 1935, changed the carpet game as it allowed high-quality tufted carpets to be produced which were much easier than the woven, woolen threads. With faster production process, they lowered the overall production costs resulting in price drop of carpet flooring which allowed more families to afford it. Origi-nally these tufted modern carpets were made of cotton. However, the develop-ment of new types of nylon in 1950s brought in further durable tufted carpet which lasted longer, and were inexpensive.

These modern carpets are now redefining home decor, suiting and satisfying the aspirations of the art connoisseurs of modern times. The decor rugs are making the beautiful homes harmonious by blending colours, textures and di-mensions.The abstract rugs, like an abstract painting, are adding colour, style and trend-iness to a room’s décor.

The modern living room carpets are bringing in style and practicality to your room while the luxury carpets are making your room decor classic and refined.

So, the overall evolution of carpets from being traditional rugs or contempo-rary rugs to modern carpets brings an interesting story, narrating the tale of lasting legacy which is being preserved since ages in the form of home carpets, redefining the style statements for houses, offices, kitchens and balconies.